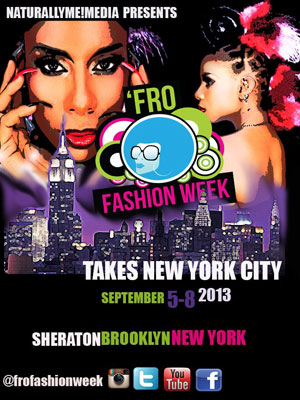 According to a recent article in the New York Times, models of color accounted for only 6 percent of the looks that paraded down the catwalks at the recent Fashion Week in New York City. This fall, a new pop of color and texture will be added to Gotham's fashion calendar with the debut of 'Fro Fashion Week, to be held September 5th through 8th in Brooklyn.

The official Fall 'Fro Fashion Show, themed GOTHIX, will take place on September 7th at Brooklyn's cool Kai Studios. It will feature a line-up of original designs by six emerging designers who were chosen from cities across the nation. Diverse models and a celebration of curly, kinky and coily textures will spotlight non-traditional looks that are currently missing from the industry.

"Not everyone can find themselves in New York Fashion Week," says Valaira Sa-Ra, Executive Producer of the 'Fro Fashion Show. "We wanted to bring Fro Fashion Week to New York because we cater to a demographic that isn't typically represented." Fro Fashion Week extends the energy, creativity and high fashion experience to attendees, designers and models who would not normally have the opportunity to attend the shows at Lincoln Center.

The featured designers presented at GOTHIX include New York's very own, D'Andra Williams of Renee Fredrique. Presenting a quirky take on the GOTHIX theme, Renee Fredrique is all about mixing and matching the unexpected. Chantel Gibbs of Shannon Shenone in Elmont, New York, will present a gothic style that borders on punk-rock edge. Using geometrical cutouts throughout her designs, Shenone delivers a razor-sharp aesthetic for fall.

Ronnisha De'Lynn of Kansas City's Aura Clothing brings an edgy, chic style to the runways. For fall, we'll see a mix of florals with dark fabrics, presenting a truly feminine perspective of the theme. Antoinette Middleton of Florida's I AM Designs will showcase high-end attire for the curvy woman.