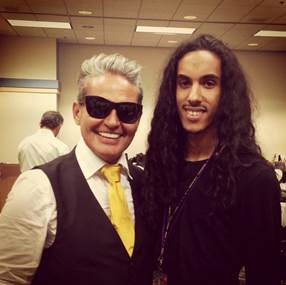 On June 10, Oribe Hair Care co-founder Oribe selected one talented stylist to mentor for six months during the Backstage Miami THE ONE contest. After reviewing the work of the nearly 400 stylists participating in the event's Hands-On Workshop, Oribe announced that 23-year-old Kevin Green-an assistant at Luigi Bruni Salon in Birmingham, Mich., is "THE ONE."

"There were so many talented stylists, so this was such a difficult decision," says Oribe. "Kevin caught my attention with both the look he created and his way. There's something special about him."

The inspiration for the competition was the mythological Latin creature the Chupacabra. While some attendees created gravity-defying, intricate or over-the-top looks (all of which were heralded by Oribe), Green opted for a simple look and then added an unexpected touch-a small, airy pouf on the top of the head that contrasted the slick pointed shape of the style. The pouf's texure was inspired by hair presented at the Oribe Hair Care-sponsored Skaist-Taylor Spring/Summer 2013 fashion show.

"I went into THE ONE looking for a sparkle and what I found was a fuzzball!" says Oribe.

After graduating from cosmetology school in Michigan, Green, 23, has been assisting Luigi Bruni for the past two years. According to Bruni, the top talent will be getting his own chair in December.

"Kevin is creative, spontaneous, fashion-obsessed, passionate about hair and an overall beautiful person," said Bruni, Kevin's current mentor. "He's so amazing with clients that I have no problem having him take over if I can't see someone. People gravitate toward him in the salon…and clearly Oribe felt that!"

Kevin received a full kit with tools and products and a bag of DVDs that Oribe hand-selected for their iconic hair. Oribe will soon start his mentoring program, with regular phone calls and in-person meetings, photo shoots and more.

"I'm excited to just be in Oribe's presence," Green said. "I wanted to be THE ONE so I could turn my passion for hair into greatness…just like Oribe did. This is going to be a life-changing experience, and I want to learn everything!"