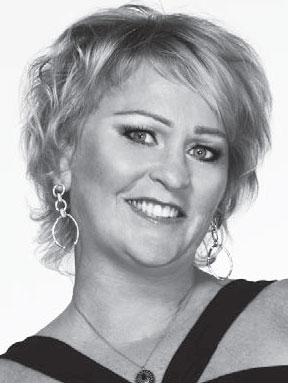 Hailing from a small town in Georgia, Petenbrink now has a busy private practice in Hollywood, travels the U.S. for Joico color education and somehow fi nds time to do character colorings for lead actors and hundreds of extras in blockbuster movies. One of her most recent movie gigs: Hunger Games.

“I met movie stylist Linda Flowers at a color seminar that I was teaching for Joico a few years ago,” reveals Petenbrink. “We developed a great working relationship and began doing various projects together. When she became the lead hairstylist for Hunger Games, she approached me to do the color for the leads and extras. To say that it was an amazing opportunity is an understatement!”

What Cherry doesn’t mention is that she also undertook a crushing workload that included coloring 600 wigs, hairpieces and extensions, doing 100 color applications on extras’ existing hair, and shouldering the responsibility of coloring and maintaining the lead actors’ haircolor for fi ve months during filming.

“Creating the color formulas wasn’t that different from doing a hair show,” Petenbrink assures. “You have to know exactly what’s expected of you and always be mindful that whatever you do, it must refl ect the culture of the company or, in this case, Hunger Games’ Capital City.

“The overall look for Capital City society had to be couture runway. I was also given very specifi c instructions about each shade for the leads, including not having a speck of warmth and remaining true to the colors described in the book: Peeta has sandy, ash blonde hair, Katniss and Gale have dark ash brown, and on down the line.”

Prior to Hunger Games, Petenbrink turned Tom Berenger from a handsome brunette to a silver fox for Stiletto. She has also wrapped up three other fi lm-related projects that are still hush-hush. “Creating character colors for movies has become an important part of my career,” she smiles. “However, my bread-and-butter remains my role as a color educator for Joico and, of course, my loyal clientele.”