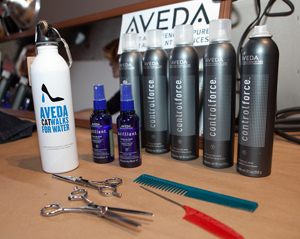 A lineup of designers, including Christian Siriano, Tibi and NAHM, went retro as they drew inspiration from the fabulous fashions of past decades. The catwalks of New York City's Mercedes-Benz Fashion Week, held February 9 to 16, demonstrated the influence of the past on modern-day fashionistas. For these nostalgic designers, Fall/Winter 2012 means flashback looks that recall the bygone eras of the '20s, '30s, and '60s. The collections preview a range of styles that will reign-from the dark, feminine bat-inspired looks at Christian Siriano to the glamour and grace of the roaring '20s.

HOT invites you to take a peek backstage at the key beauty looks that debuted at the Christian Siriano, Tibi and NAHM shows.


From behind-the-scenes at the Christian Siriano show, a bit of drama takes flight.

Bats, specifically the '30s film "The Vampire Bat" was the inspiration for designer Christian Siriano's Fall/Winter 2012 collection. "These flying demons of the night intrigue me with their creepy, dark and dramatic presence, as well as the intricate details of their veins and the bone structure of their wings," says Siriano. "I find beauty in the wings of the bat, which can be seen in the details of the clothing-leather appliqués, ethereal flowing silk crepe dresses, tops and capes taking flight."

The black and white '30s film featured lead actress Fay Wray, who was elegant and sophisticated wearing beautiful blouses tucked into long evening skirts in black and white-a look juxtaposed with the core horror content and backdrop of the movie. The grainy nature of the old film also served as inspiration for the color palette and the modern prints seen throughout the entire collection.

To complement the look, Aveda Global Creative Director Antoinette Beenders styled the hair smooth and straight. "The silhouette of the style is inspired by the mystique of bats, as in Christian's collection," says Beenders. "We kept the hair close to the head to mimic the body shape of a bat, using the braids as an anchor at the nape, as well as a way to minimize volume. The style is uncomplicated, modern and sophisticated."

Here, a beauty update from the Tibi show.

Boy meets girl in Tibi's masculine-inspired sportswear collection that flaunts feminine details, layering and lots of extreme texture. "The nineties meet the sixties in the fall collection-a continuation of Spring 2012 with clean, relaxed styles," says designer Amy Smilovic of Tibi. The Fall/Winter 2012 palette showcases dark maroons, forests and various riffs on black, grey and ivory, which are accentuated with pops of cobalt and metallic teal hues.

Since the show offered a fresh, modern take on Smilovic's nod to the '60s, stylists Frank Rizzieri and Kevin Ryan-both for Aveda-complemented the collection with cool, easy styles. Simple, undone ponytails at the nape of the neck created a lived-in look that balances function and form.

"The collection has a very '60s feel and we didn't want the overall look to be too retro," says Rizzieri and Ryan. "This is modern, easy-looking hair. It's effortless, current and practical, like a 5 p.m. hairstyle-a low, messy ponytail that looks as if the girl swept her hair up at the end of a long day."

Preview the Fall/Winter beauty and fashion looks that were shown at the NAHM runway show.

The strong, elegant woman of the 1920's served as inspiration for design duo Nary Manivong and Alexandria Hilfiger of NAHM. Their Fall/Winter 2012 runway show highlighted looser-fitting looks and a hint of sheer. The show evokes the designers' muse-a graceful yet powerful woman from the 1920's.

"The look is designed after Diana Vreeland, a noted figure in the worlds of fashion and art-and style advisor to First Lady Jacqueline Kennedy," says Jon Reyman for Aveda, the stylist who fashioned hair looks to suit NAHM's style. Vreeland is the epitome of feminine strength and distinction.

"Nary and Alexandria came to us with an image of a blow-back bob in their minds. They wanted the look to appear short, matte and smooth with a clean, graphic shape," says Reyman. "They really wanted the women to look powerful. We translated that idea to a strong, modern, bold look."