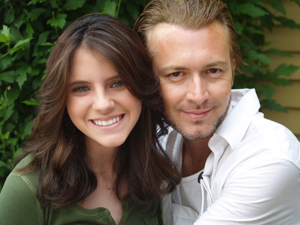 Set on an island off the coast of New England in the 1960s, Moonrise Kingdom tells the story of a young boy and girl who fall in love and decide to run off together. Following their escapades, the town is turned upside down searching for them.

Barbosa created a naturally sun kissed look for Kara Hayward (the character Suzy). The film's director wanted to achieve a look that showcased warm tones with golden highlights. To achieve, this summer look, he took Hayward's level 5 to a level 7 using IT&LY HAIRFASHION's Aquarly 8D (Light Gold Blonde) with 20 Volume Aquarly Developer on the roots. He used 30 Volume on the mid-shaft to the ends. Next, he painted Easily Blonde highlights, so it would appear as if the hair was naturally weathered by the sun. To maintain Hayward's color during filming, Barbosa used IT&LY's Delyton demi-permanent hair color system.

After the film wrapped up, Barbosa transformed Hayward's hair back to her natural level 5 by using IT&LY's Aquarly 5N (Light Brown) mixed with a bit of 5C (Light Ash Brown), which was applied to the mid-shaft and ends, leaving some of the golden highlights out by applying IT&LY's Pure Conditioner to them and wrapping them in foils. To create a more ombre look, Barbosa applied 5C (Light Ash Brown) at the root area for more depth. After processing, he applied IT&LY's Delyton 4N to add more depth and intensive shine.